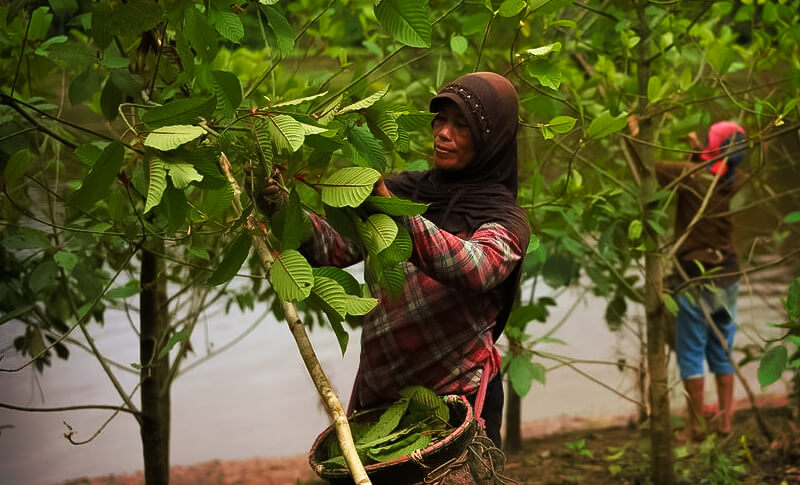 Origin of Kratom in Indonesia

It is a known fact that Kratom originates from Southeast Asian countries like Thailand, Malaysia, and Indonesia. The special herb is known for its positive effects like pain relief, mood enhancement, energy, immunity, and much more experiences favorable conditions in these tropical countries where the soil and climate are perfect for their growth.  However, the use and possession of Kratom even in these countries is under the effect of legal complication. Among these countries, the use of Kratom in Indonesia is regulated to some extent creating a huge impact on the Indonesian economy. The very information on the conventional use of Kratom in Indonesia is limited since Indonesia falls under rural countries in the world.

With a huge increase in the sales of Kratom over the years, the poor villages in Indonesia have gone through an economic shift, where the local villages have transformed into booming areas with people being able to afford cars and large houses for survival.

Indonesia has been the largest exporter of Palm oil, rubber, and other products over the years, however, at present, the demand for these products from Indonesia has really suffered a backlash with people turning their attention to other sources. One of the sources that bring in huge money for Indonesia is Kratom. Though Kratom use has been banned in Indonesia, the Government hasn’t imposed any ban on the export of Kratom. With the growing popularity of Kratom in the United States, if Kratom is banned there now, Indonesia would be the major sufferer of this action. This is due to the fact that a large group of Kratom farmers and other people are dependent on the export for their livelihood. Also, Indonesia is one of the largest suppliers of Kratom in the United States.

With the introduction of GMP guidelines by the AKA for the Kratom vendors, every vendor is now looking to enhance their services with better manufacturing and processing techniques to get enrolled in the program. So the farmers who supply Kratom to these vendors will also have to purify their acts to win the confidence of the customers. Also, the vendors will associate only with these farmers who tend to maintain high standard procedures.

Also, the maintenance of Kratom business in the United States is an expensive affair, and to float this high-risk operation, they will have to make sure the business keeps up with the demand through customer satisfaction.

Economics involved in the Export process

Indonesia comes under the spotlight of Kratom only because of the export process and not due to the use of Kratom in their territory. Kratom use has already been banned in Indonesia for some time and also the traditional information for use is not available. However, some of the locals still use Kratom in Indonesia though they constitute a less number compared to the number of people who consume Kratom in the West. Hence, Kratom export definitely plays an important role in shaping up the Indonesian economy with the inflow of money from all over the world.

Most of the products that are controversial make huge money due to the spotlight it tends to receive. Also, some of the products even change the lives of people who consume them. However, at this point, it is unknown to deduce whether the Kratom bloom would happen in Indonesia as well. But this plant had been in use even before centuries in Indonesia. So even if the change in economics takes place, Indonesian people might tend to use Kratom for their own purposes rather than export.

Though the boom happened even before a decade in Indonesia, there has been no intense hi-tech research to study Kratom in detail. Indonesian people are very much aware of the complication and controversies that threaten Kratom but they somehow try to sustain the demand. To summarize, Indonesia will be one of the largest producers of Kratom as long as Kratom is attainable.

Indonesia tends to have large Kratom plantations and hence, with the growing demand and competition, the farmers have developed business skills and also try to adapt to modern technology to reach out to their customers. For example, these farmers use Social media platforms and other generic methods to market and distribute their Kratom.

With prominent scientific research all set to dominate the market soon in Malaysia and the United States, consumers must be put in a place where they could trust their suppliers. Illegal companies might take advantage of this situation and hence as a customer, you must be aware of the company and from where they source your Kratom.

It is true that a huge Kratom boom is happening in the West but with any economic changes, no other western countries would be affected as Indonesia. Indonesia might be completely dependent on Kratom for its money and consider this to be an import-export product; however, it might not be the major import product for the countries in the West. Hence, there are chances that Indonesia could become the victim in cases of any market fluctuations.

Previous Post Why Shop Kratom for Sale at Kay Botanicals & Why Customers Class us the Best online Kratom Store? Next Post What are the best Kratom strains that treats Insomnia?

I love my Kratom ❤️It helps me sooo much ❤️I don’t take anything for anxiety,pain pill,anti depressant😊❤️I haven’t takin a drug in 10 years 😊😇😇😊